A collaboration project between:

The Santa Giacinta Marescotti Study Center together with the Ruspoli Association, the Oficina del Historiador de la Ciudade de Habana and the Ensamble Ars Longa with the patronage of the Italian Institute for the History of Music. The project was coordinated by Prof. Giorgio Monari.

The harpsichord will be presented during the XX edition of the Italian Week in Cuba, during the Ars Longa Baroque Festival on the occasion of the III Itineranza Ruspoli between November 27th and December 3rd.

The harpsichord Made in Cuba

The instrument presented here is based on a model by Giovanni Battista Giusti, from Lucca, from 1681.

It is a typical seventeenth-century Italian instrument from “Continuo”, of the type called “False Custody”.

The Italian tradition of harpsichord construction, the oldest in the world and which dates back to the end of the 1400s, was based on extremely light instruments, made of cypress left “natural” and protected in cases with lids and variously decorated.

Throughout the sixteenth century this was the usual style in the construction of harpsichords throughout Italy, from Veneto to Sicily.

Starting from the second half of the seventeenth century, for reasons of practicality and economy, more robust instruments began to be built which were internally lined with natural cypress and externally decorated as if they were cases, with paintings, gilding, leather or leather coverings. and so on.

The aesthetic result was to simulate a light instrument, as per tradition, inserted in its normal drawbridge.

The instrument based on “G. B. Giusti, 1681 “which I assembled here in Havana in October 2017, in the lutherie workshop of the Oficina de l’Historiador, with the help of two excellent students, Josè Collazo and Ivet Enamorado, is it was prepared piece by piece in my current laboratory in Canepina (VT) and is a typical instrument of this kind with a “false case”.

Giusti’s original is also one of the harpsichords most copied by the makers of my generation due to its great elegance, its simplicity of construction and the solidity of its structure.

This is a typical Continuo instrument. Its clear and “crunchy” voice makes it ideal for accompaniment of medium-sized orchestras and for singing.

The precise and clear sound also makes it indispensable as a rhythmic base and as a guide for the intonation of instruments with non-fixed sounds such as strings.

The same precision of the sound makes it a perfect instrument for counterpoint and fugues.

The case of the harpsichord is in first and second choice poplar and spruce. The moldings, the internal coverings, the bridges and the nut are in cypress; the fingerboard is covered in boxwood and ebony.

The wind chest is in stratified beech covered with walnut and the jacks are in pear.

It is fitted with brass strings for the entire range which is 51 frets and goes from low C to D over-high.

It has two registers of eight feet in unison.

The painting on the lid depicts the Ruspoli di Vignanello Castle in a partially idealized view of the high-latitude countryside with Monte Cimino in the background.

The rather quick realization of this painting, completed in five days, gives it a slightly “sketchy” and monochrome aspect.

In fact, it made use of only three rather fast drying oil colors, essential for the “slow” climate of the tropics: Cobalt blue, natural umber and sienna.

The harpsichord made in Cuba is my work no.114. 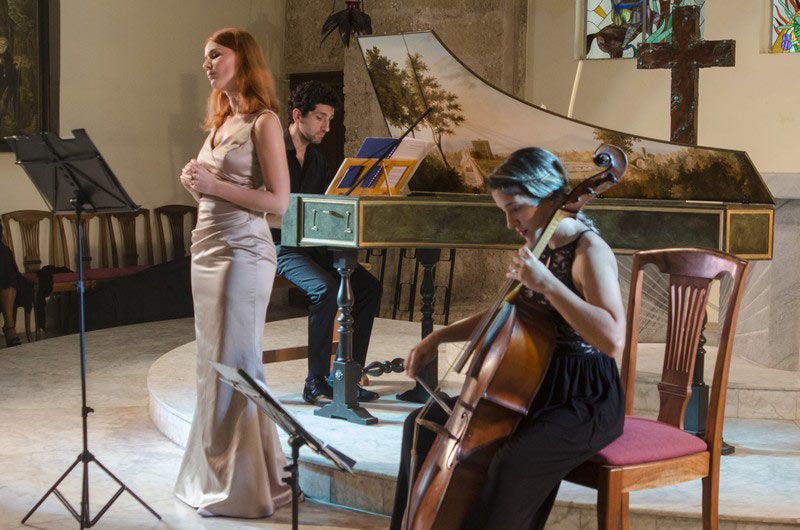 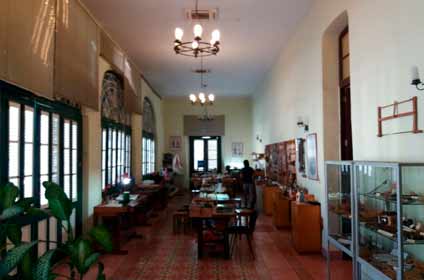 Andrea Di Maio trained at the International Violin Making School in Cremona and studied the ancient keyboard instruments with G. Grant O ‘Brien in Pamparato and then at the Russell Collection in Edimburgh. He began his activity as a builder in 1986 with an artisan workshop in Rome, faithfully inspired by the construction canons of the ancient European schools. He regularly collaborates with the Museum of Musical Instruments in Rome, with the Sibelius Academy in Helsinki and with various conservatories in Italy and abroad. Works by him are present in numerous countries around the world. Since 2012 it has been included among the excellences of the Lazio Region for artistic handicraft businesses.